Gender diversity is fintech’s not-so-hidden magic weapon, but be careful how you use it

“Power partnership” is pretty much how I feel about the collaboration between me and Armands. Since working together for 3 years, and leading to immense growth in the company’s bottom line, resulting in EUR 8.7m profit in 2018, it’s become clear to us that there’s something magic in this combination. What is the magic?

Well, all the data points towards gender balance

One study by McKinsey found that top-performing companies had one thing in common – gender-diverse management. This is supported over and over again by data and has even led to the influential statement by Goldman Sachs that they will not take a company public if it doesn’t have at least one woman on the board. For Goldman Sachs, one of the largest financial entities in the world, it’s just good business. They want their investments to have the best chances, and those chances go up when women are involved:

“Initial public offerings of companies in the United States with at least one female director on their boards performed ‘significantly better’ compared to those without”, David M. Solomon, CEO of Goldman Sachs

This is something I feel very strongly about, and I wanted to share my thoughts with you.

The case for diversity

We’re seeing increasingly more companies in Europe placing a focus on diversity, and for a good reason – diversity in companies plays a major role in business success.

That impact on the bottom line is affected by a variety of factors:

A study by Linkedin found that 78% of companies prioritize diversity to improve culture, and 62% do so to boost financial performance.

Why is that so?

There are specific circumstances that have brought diversity to the forefront: changing demographics are diversifying our communities (and therefore, target markets), and companies that aren’t adapting to current realities are finding that there are shrinking talent pools available to them. A study published in the Harvard Business Review found that the reason improved business results was that the presence of women broadened discussions to better represent concerns of a wide set of stakeholders, including employees, customers, and the community at large.

As a result, we see that this growing evidence that diverse teams are more productive, more innovative, and more engaged also makes the benefits of gender diversity hard to ignore.

The importance of diversity for fintech

In business, and especially in the fintech industry, there is a need to make fast, but at the same time thoughtful, decisions. And since different genders have been proven to weigh decisions differently, having the synergy of both female and male representatives at top management leads to balanced decision making. But it has to be said that gender diversity is not the be-all and end-all – the key is to have open lines of communication and to take advantage of the benefits provided by diversity.

According to the most recent Eurostat data, Latvia has the highest percentage of female leadership in leadership positions in the EU – at 58.3%. At TWINO, we strive even higher – we’ve recognized this correlation between gender representation at a management level and improved product economics, employer net promoter score, lower personnel turnover. For example, when I took over in July of 2019, the Employee Net Promoter score was at 56. By Q4, the ENPs had increased by 30 points, 86. As a result, we have 58% female representation in the Group’s management positions.

It’s also a result of our diversity mindset – from “culture fit” to “culture add”.

This has come by starting small – by weaving diversity into everything we do. We started by changing the bar with which we assess talent, to better create a culture of differences. “Culture fit” can lead to too many like-minded employees and complacency, while “culture add” leads to unique skills, viewpoints, and ultimately innovations. For example, we’ve hired people with backgrounds in agile tech companies, bureaucratic banks, and even with regulators. And this diversity is what gives us our edge. That was particularly evident when preparing documentation for our IBS license application. It came in handy to have team members with regulator experience, who knew how to communicate best with the responsible financial authorities, while our teammates with agile development experience were able to build processes so that they don’t impact TWINO’s ability to work efficiently.

Besides the management board’s female representation being 22% points above the European average of 36%, we have a workforce that has an age span covering 35 years. For an agile fintech solution, we feel like this is an accomplishment.

Personally, I often am met with incredulity about being a female CEO. But I don’t see myself categorized into one specific gender box. I see myself as a person who has their own strength, their own challenges, and that’s also how the TWINO team thinks.

A word of caution – where do you draw the line?

The situation is undeniably improving. We’re seeing boards prioritize female representation as demonstrated by the fact that as of July 2019, all S&P 500 companies have at least one woman on the board. We’re seeing conferences prioritize the inclusion of female speakers.

But I can’t hide the fact that when I go to a conference I’ve been asked to speak at, I feel disappointed if I realize that I’ve been asked there as the “token” woman. I can’t help but feel like my gender has been more important than my accomplishments in getting me to that stage. Acknowledging that it’s a good step, I have to say that the quotas aren’t necessarily the best option. At the same time, better options haven’t been found.

Until other companies embrace the “culture add” principles, and until women themselves intrinsically feel entitled to a place at the table, we’re forced to partake in positive discrimination to see those women in leadership positions. It’s a start. 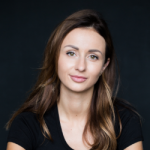 As TWINO Group Chief Executive Officer Anastasija drives overall success of the business and increasing shareholder value through execution of the strategy. Before her role as CEO of TWINO Group, Anastasija was Group CFO for three years as well as Group COO for a year.

As TWINO Group Chief Executive Officer Anastasija drives overall success of the business and increasing shareholder value through execution of the strategy. Before her role as CEO of TWINO Group, Anastasija was Group CFO for three years as well as Group COO for a year.